“Hyper means excess, and hidr means sweat. An O is there to make it sound better, and –sis refers to a condition.”

Normal sweating is a mechanism to maintain healthy condition through regulation of body temperature. But in some people, this mechanism could become overactive to the point that causes numerous problems for the patient. This condition is called excessive sweating, or hyperhidrosis.

Excessive sweating may be primary or secondary.
Secondary hyperhidrosis is the result of an underlying medical condition (such as -but not limited to- thyroid disorder, pituitary disorder, tumors, acromegaly, anxiety and stress disorders, Congestive heart failure, Parkinson’s disease, withdrawal syndrome, gout, diabetes mellitus, menopause, infection, Pheochromocytoma, spinal cord injuries, mercury poisoning, etc.) or a side-effect of medications. In these cases, the underlying condition must be addressed.

Primary hyperhidrosis is an independent condition, meaning that it is not secondary to another medical condition or medication. Instead, it is caused by over-activity of sympathetic nervous system of the body. Primary hyperhidrosis is usually started in childhood or adolescence and may be inherited (30-50 % of the sufferers have another family member with the same condition). Even though hyperhidrosis is not a direct consequence of physical activity, heat or stress, these conditions could exacerbate the situation. Also, some foods and drinks, nicotine and even some smells may have a role in increased sweating.

Diagnosing the type of hyperhidrosis

primary and secondary hyperhidrosis are differentiated by a number of symtpoms:

– Primary hyperhidorsis starts at low age (usually childhood or adolescence), whereas the onset of secondary hyperhidorsis is not age-related and many times happens suddenly at higher ages.

Which parts of the body may be affected? 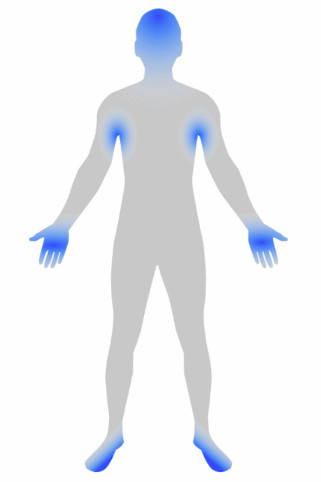 Although excessive sweating is not categorized as a life-threatening condition, it is still a very serious medical problem which can effectively disable many aspects of one’s life. In fact, most sufferers would describe their quality of life as poor or very poor.

The mental and emotional consequences of hyperhidrosis can be devastating. Undertaking many routine activities might become impossible or extremely embarrassing and lead to loss of social, educational, recreational, emotional and career opportunities.

Simple handshaking, grabbing items and following many careers are just a few examples of the situations avoided by palmar hyperhidrosis sufferers.

Excessive underarm sweating may force the person to avoid social events in order to hide the sweat stains. In severe cases, one may have to change clothes several times a day.

Sweating in soles of feet may turn putting on shoes an unpleasant experience and may produce unpleasant and embarrassing odor.

In all these cases, the hyperhidrosis sufferer not only experiences the unpleasant physical sensations associated with the excessive sweating, he/she is also constantly aware of his/her external image and this can lead to anxiety and exacerbation of the condition.

Some other physical problems related to hyperhidrosis are dehydration, cold and clammy feeling at affected areas, skin infections, nail infection, and a higher risk for kidney stone formation.

Fortunately, hyperhidrosis can be completely treated and controlled. There are different lines of therapy available, including:


With Aluminum Chloride as the most widely used active ingredient, the use of these products is considered a non-invasive method to reduce sweating; however, they rarely help hyperhidrosis sufferers, effects lack durability, and can cause skin irritation.

Botulinum toxin A is the main medicinal preparation used to treat hyperhidrosis. It is a very potent neurotoxin generated by the bacterium Clostridium botulinum. The mechanism of action for both beneficial and lethal effects of this toxin is inhibition of release of acetyl choline, a neurotransmitter released at certain nerve endings, including those responsible for excess sweating. Injections have to be repeated every several months. Provided that the injection technique is correct, this method is efficient; however because of the high toxicity of the substance, it requires high skills on the part of the physician, injections are painful and uncomfortable, and because of high cost and the need to repeat the treatment, it is considered the most expensive treatment for hyperhidrosis. The main side effect, especially when used to treat palmar hyperhidrosis, is muscular paralysis. The reason for this effect is that acetyl choline is also the neurotransmitter responsible for messaging between somatic nervous system and skeletal muscles.

The flu-like syndrome has also been reported. Moreover, there is a possibility for failure of treatment due to formation of endogenous antibodies against this toxin; although this is rare.

In addition to botulinum toxin A, there are some reports regarding the use of psychotropic or anticholinergic medications; but their long-term use cannot be recommended due to their noticeable side-effects.

In this type of surgery, or its modified version, endoscopic sympathetic blockade (ESB), some of the sympathetic nerves are cut, burnt or clamped (in all cases, the results and side-effects would be irreversible). Due to the complexity of the nervous system of the body, the results of this operation are unacceptably unpredictable and numerous serious and irreversible side-effects may follow the surgery. It is reported that even though around 90 % of the patients express their satisfaction immediately after the surgery, more than half express their regrets later on because of a decrease in their quality of life. Apart from the general risks associated with any kind of surgery, the side effects include (but are not limited to) compensatory sweating (often more severe than the condition before the surgery), Horner’s syndrome, thermoregulation disorders, cardiac complications such as bradycardia, loss of vasoconstriction, hemothorax, Nerve sprouting, which may lead to pain, Frey’s syndrome, collapsed lungs (in 2% of patients), corposcindosis, decreased ability to exercise or sometimes conduct normal physical activities, and suppression of baroreflex response, among many more.

The long and overwhelming list of adverse effects associated with this surgery, has led to its ban in its birthplace, Sweden, in 2003. Also, a 400-page review from Finnish Office for Health Care Technology Assessment has concluded that the adverse effects of ETS surgery are “unusually high”. Unfortunately, despite all these facts, the ETS surgery is still heavily advertised, yet the huge risks associated with this operation are rarely described. As a result, undergoing surgery to treat excessive surgery is not recommended.

Iontophoresis is performed by passing a mild and special current generated by the iontophoresis device through the areas of interest; and can treat mild to severe cases of excess sweating.

Very high success rates, durability of effects, Low overall cost, possibility of independent management of therapy and individualized therapy based on personal needs, possibility of sharing the device among several people and lack of side-effects are among the reasons which make this technique the most distinguished method of treatment for hyperhidrosis.

The mechanism of action of iontophoresis technique is probably through reversible desensitization of sweat nerve endings and/or reversible blocking of ion transfer at sweat nerve terminals due to proton accumulation without physiologic damage to the glands or nerve endings. Since comparison of microscopic images of sweat glands before and after iontophoresis shows no structural alterations, accumulation of mineral particles of water to block the sweat glands may not be the main mechanisms of action of iontophoresis.

This site is protected by wp-copyrightpro.com